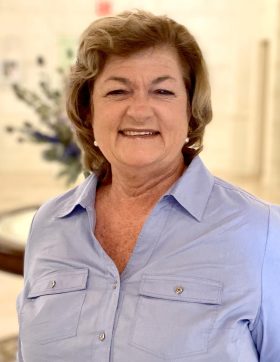 Mary O’Neill is the Executive Director and finance manager of America’s Future, Inc., guiding the nonprofit organization’s administration, operations, finances, and educational programming to fulfill its mission to preserve American values and ideals, protect the nation’s Constitutional Republic, promote strong American families, revitalize the role of faith in our society, and advance the virtues of free market capitalism.

She has successfully led the implementation of numerous initiatives that have revitalized the legacy organization such as its multimedia educational projects, Passing The Torch Of Freedom video series; America book series including, Exploring America’s Founding Documents and Understanding The Separation of Powers Principles; podcast series, America’s Mondays With Mary, and other America’s Future programs like its popular weekly newsletter, Champions For America member network, scholarship and grant programs, and Amicus brief filings defending the constitutional rights of Americans. In addition, Mary oversees the Little Flower Advisory Board of “Project Defend & Protect Our Children,” established by America’s Future to eradicate the exploitation and trafficking of children – the future of America.

Mary has decades of experience working in leadership positions in the nonprofit and private sectors to help organizations accomplish their goals.

Prior to America’s Future, Mary was an executive with the Diocese of Providence for over 10 years as Finance Director for two Catholic Churches in Newport, Rhode Island, one of which is the renowned St. Mary’s Church, named to the National Register of Historic Places, and internationally known as the location of the marriage of President John F. Kennedy and Jacqueline Lee Bouvier.

Previously, she worked for the Preservation Society of Newport County, a nationally-recognized nonprofit organized to preserve local historic properties and deliver educational programs on the history of America’s culture and heritage. Earlier in her career, she owned several start-ups and was the founder and owner-operator of one of the nation’s most acclaimed indoor skateboarding parks, Skater Island, where many of the top skateboard pros of today were discovered.

Mary’s volunteer involvement is extensive as an advocate for the protection of children from harmful environments and providing care and counseling to families with loved ones in hospice care. She holds a B.S. in Environmental Science and an M.B.A. with honors from the University of Phoenix. Throughout her life’s journey, she has used her professional and personal experiences to seek out the best in others and find ways to nurture and guide individuals, teams, and organizations to achieve success. 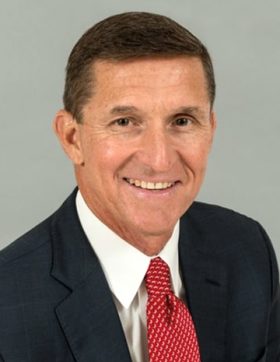 CHAIRMAN OF THE BOARD

Lt. General Michael T. Flynn, USA (Ret.) dedicated his life in service to the nation with the U.S. Army for more than 33 years. His distinguished military career culminated as the Director of the Defense Intelligence Agency and as the nation’s highest-serving military intelligence officer.

Upon his retirement in 2014, General Flynn continued serving the public in leadership positions with various business, veteran, and civic organizations. In 2017, he was appointed as the country’s 25th National Security Advisor to the 45th President of the United States, Donald J. Trump.

As an expert in Diplomacy, Statecraft, Foreign Policy, Strategy Formulation, Defense, Intelligence, and other areas of national and international security, General Flynn is a prominent commentator and sought-after speaker on military and global affairs.

He is a national bestselling author of The Field of Fight: How We Can Win the Global War Against Radical Islam and its Allies. He is also the author of A Letter To America: The Time To Fight For Your Faith And Family Is Now and co-author of The Citizen’s Guide To Fifth Generation Warfare. His numerous articles, essays, and papers have been published worldwide.

General Flynn has earned three master’s degrees and is the recipient of numerous civilian, military, intelligence, and law enforcement awards.

He is married with two sons and has several grandchildren. 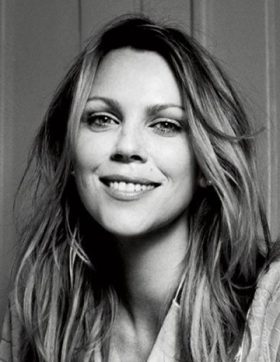 Lara Logan is an award-winning investigative journalist. She is known internationally for her fearless and candid reporting from some of the most dangerous places in the world in her role at “60 Minutes” and for her investigative series “Lara Logan Has No Agenda.” Lara has covered some of the most controversial topics of our time such as media bias, Mexican drug cartels, trafficking, and the dangers of Big Tech.

With decades of honest reporting and speaking up for the truth regardless of the politics, Lara is a powerful voice for freedom and liberty around the world. Her trusted reporting has helped the public understand the political and human conflicts that exist in America and around the globe. Her skilled approach to investigative journalism has earned her a prominent place among the world’s best foreign correspondents. She is the recipient of almost every journalistic and reporting award in the profession including the highly prestigious duPont-Columbia University Silver Baton, the Overseas Press Club, the Emmys, and the RTNDA/Edward R. Murrow Award, to name a few.

Presently, she is planning the launch of her new show and establishing the “Press Club of America” as a home for independent journalism that carries on the principles and standards of the past, while creating a solid foundation for the media moving forward. 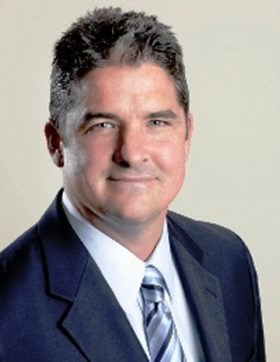 Joseph J. Flynn is a serial Healthcare IT entrepreneur. He is also the youngest of Lt Gen ( R ) Michael T. Flynn 8 siblings. Since 2017, he has been co-Trustee and Official Spokesperson for the Mike Flynn Legal Defense Fund which he co-founded with his sister Ms. Barbara Redgate Flynn to fight against the political persecution of their brother.

For the past 20 years, Joseph has served as founder and CEO of two Southern California based successful Healthcare IT Services startups. One of those companies, Auxilio (AUXO) he brought from zero revenue to a NYSE listing in January of 2017. The second Vereco, Inc., he successfully sold to a New York-based private equity group in November of 2018.

Joseph is current CEO of Global Telehealth Services, a Cleveland, OH based telehealth startup, which he joined in July of 2020. He is also on the Board of two other technology related startups.

Prior to his healthcare IT career, he spent 10 years in the international exhibition industry where he managed and acquired numerous large technology trade shows, particularly in Latin America and Spain.

Joseph is a 1987 graduate of the Catholic University of America with a BA in International Relations. He is fluent in Spanish and has working knowledge of Portuguese and French. After 21 years in Orange County, CA, Joseph and his wife Valerie relocated to Sarasota County, FL. The couple have two adult daughters. 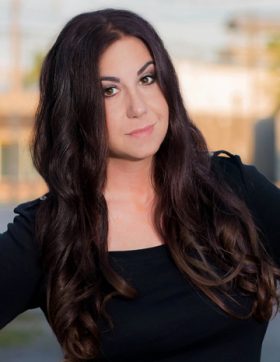 Tracy Diaz is an investigative journalist and Editor-in-Chief at UncoverDC.com.
An entrepreneur and successful C-level executive, Tracy also has wide-ranging experience in the political realm. Tracy was instrumental to the grassroots fervor that gripped the nation during the height of the Tea Party and the Ron Paul movement toward freedom and liberty.

Tracy’s political experience starts at the grassroots level and moves all the way up the spectrum to establishment politics. She has dedicated her life to preserving American freedom.

Her business acumen, investigative skills, leadership qualities, and success at corralling social media make her an asset to any organization dedicated to American values. She is happily married and has two teenage children. 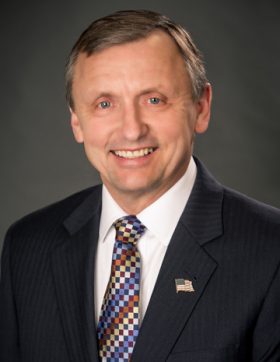 Paul’s career spans across decades of experience in healthcare administration, commercial and remodeling construction, senior project management, and business consulting. He is also the Founder and President of Renovating Hope, Inc. which rebuilt hundreds of homes throughout our country for wounded service members and veterans. He works closely with the functional medical advocates in the U.S. military that strive to bend the curve in our nation’s suicide rate.

Paul is a staunch defender of the Constitution.

He is married with one adult son and lives in Florida.