The Great Experiment For The Love Of Liberty 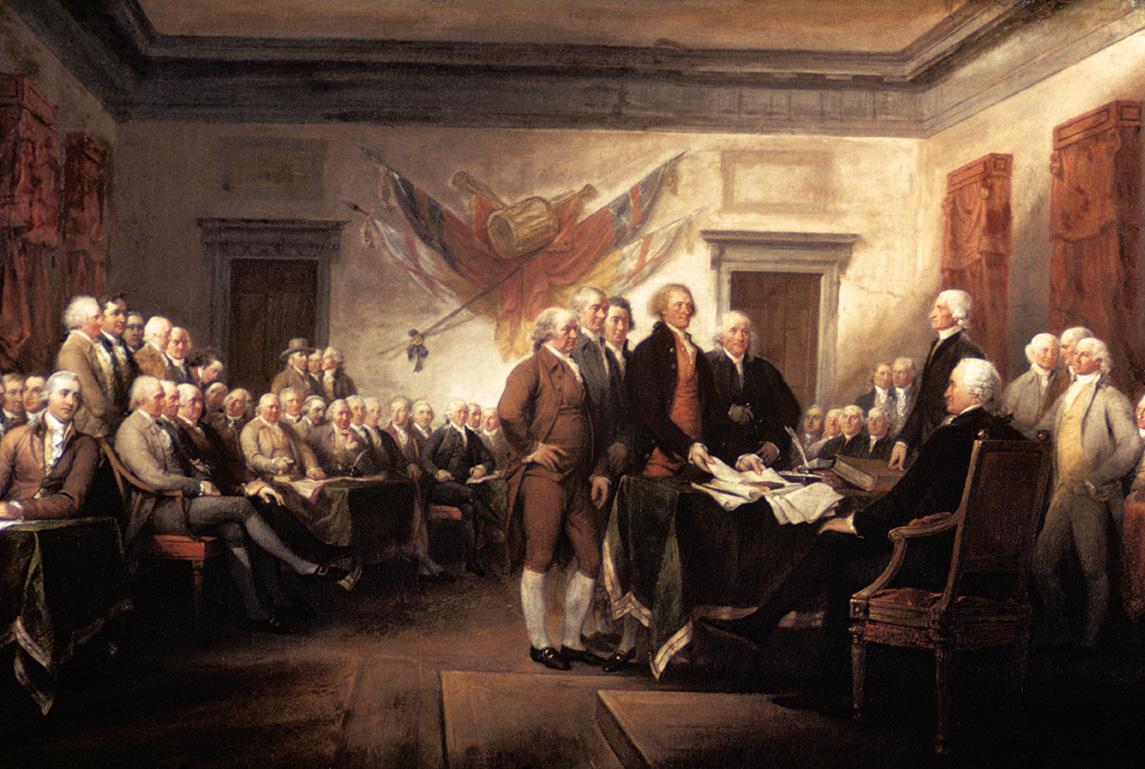 Reference to America as “an experiment in democracy” or a “great experiment” conjures up contradiction. America has existed for nearly 250 years. How can something centuries old still be an experiment? Or could this idea be a warning as to the fragile nature of what our Founding Fathers had created?

As we explore the phrase as part of America’s Future series on our country’s founding documents, laws, traditions, symbols and icons, we are reminded that our founders were men of faith and deeply suspicious of human nature. As former royal subjects of Britain, they were well aware that all governments would tend toward tyranny if unchecked, and that it would be the depth of this new nation’s citizens’ love of liberty and freedom over generations that would be tested time and time again.

The phrase first appears to be found in a 1790 letter by the father of our great country, George Washington to Catharine Macaulay, a British historian and advocate of liberty, following her visit to America in 1784-85, when she stayed with Washington and his family at Mount Vernon and met with many of the Founding Fathers and veterans of the War of Independence.

In the letter to her, Washington wrote: “The establishment of our new Government seemed to be the last great experiment for promoting human happiness.” Later, Thomas Jefferson, known as the Father of the Declaration of Independence and a primary author of the U.S. Constitution, used the word “experiment” in reference to the birth of the nation when he wrote in 1804, “No experiment can be more interesting than that we are now trying, & which we trust will end in establishing the fact that man may be governed by reason and truth.”

What these visionary leaders meant by “experiment” is the fact that America, having been created as a new nation founded on individual rights and limited government, had never been done before. The idea that free men could both protect their freedom while establishing a government that could function effectively was unheard of. Certainly, they knew that nation states come and go. And yet, they were willing to risk everything, even their lives, on this experiment because of their great love of liberty and deep desire that a government of the people, by the people, and for the people could endure the test of time.

On July 4, 2026, America will celebrate its 250th anniversary of independence. The cautionary words of those courageous fighters for freedom so many years ago still ring true for our nation today. At America’s Future, we embrace our Founding Fathers foresight in their warning to never quit the fight for freedom and dedicate our work so that this great experiment – called America – survives for future generations to carry the torch of freedom onward.

Each week, our Reader’s Survey draws smart responses and insightful comments. Thank you to everyone who also encourages America’s Future work and programs in their survey comment replies. We read each answer and all of the comments and are very grateful to you for sharing your thoughts with us. Thank you.

The exceptionally broad scope and breadth of Constitutional protections against unconstitutional infringement, by the federal government, respecting parental liberty interests to determine the care, custody, education and well-being of children are rooted in the First Amendment’s bundle of God-given rights and the Tenth Amendment’s limitations on governmental powers.

Expanding parental protections against unconstitutional infringement by state governments is gleaned from the Due Process Clause of the Fourteenth Amendment, stating in part “No State shall make or enforce any law which shall abridge the privileges or immunities of citizens of the United States; nor shall any State deprive any person of life, liberty, or property, without due process of law; nor deny to any person within its jurisdiction the equal protection of the laws..”

Our Supreme Court jurisprudence within the domain of parental rights has been cultivated over a century, and, as Justice Sandra Day O’Connor announced regarding these sacred rights, “is perhaps the oldest of the fundamental liberty interests recognized by this Court.”

In 1923, the Supreme Court issued a decision respecting parental rights, holding, “the interest of parents in the care, custody, and control of their children…liberty protected by the Due Process Clause includes the right of parents to establish a home and bring up children and to control the education of their own.”

Two years later, in 1925, the Supreme Court reaffirmed and expanded protections, holding “liberty of parents and guardians to include the right to direct the upbringing and education of children under their control.” The ruling explained that “parents have a fundamental constitutional right to rear their children, including the right to determine who shall educate and socialize them.” The Court, in this case, declared, “[t]he child is not the mere creature of the State; those who nurture him and direct his destiny have the right, coupled with the high duty, to recognize and prepare him for additional obligations.”

Then, in 1944, our Supreme Court explained, “It is cardinal with us that the custody, care and nurture of the child reside first in the parents, whose primary function and freedom include preparation for obligations the state can neither supply nor hinder.”

Seventy-five years later in 2000, Supreme Court Justice Sandra Day O’Connor, writing for the majority, addressed the wide-range of constitutional protections prohibiting infringement by government, in connection with the exceptionally sweeping metes and bounds of liberty interests of a parent or guardian to nurture, guide, raise, and care for children they rear. The Court’s decision offers a historical examination of 100 years of Supreme Court cases arising out of protections against arbitrary interference by government when the Supreme Court has determined in case after case, year after year, that states hold a position submissive to “mom and dad,” and absent extraordinary circumstances, must yield. In connection with safeguarding a child’s relationships and associations with others, Justice O’Connor reasoned,

“The strength of a parent’s interest in controlling a child’s associates is as obvious as the influence of personal associations on the development of the child’s social and moral character. Whether for good or for ill, adults not only influence but may indoctrinate children, and a choice about a child’s social companions is not essentially different from the designation of the adults who will influence the child in school. Even a State’s considered judgment about the preferable political and religious character of schoolteachers is not entitled to prevail over a parent’s choice of private school.”

A century of case law by the highest court in the land offers clarity that parents and the welfare of their children are firmly bound together with protections under the Rule of Law on all sides.

Wear Your American Pride –
Spring Cleaning at The AF Store

Spring cleaning is underway at America’s Future- and we are cleaning out our closet to make room for new inventory! Click here to order one, two, three or more of our America’s Future long sleeve tees for only $15.00. (Both men and women’s styles available). Get a jump on your Christmas gift list or do something special for yourself. Whatever the case may be, take advantage of these special discounts and wear your American pride! 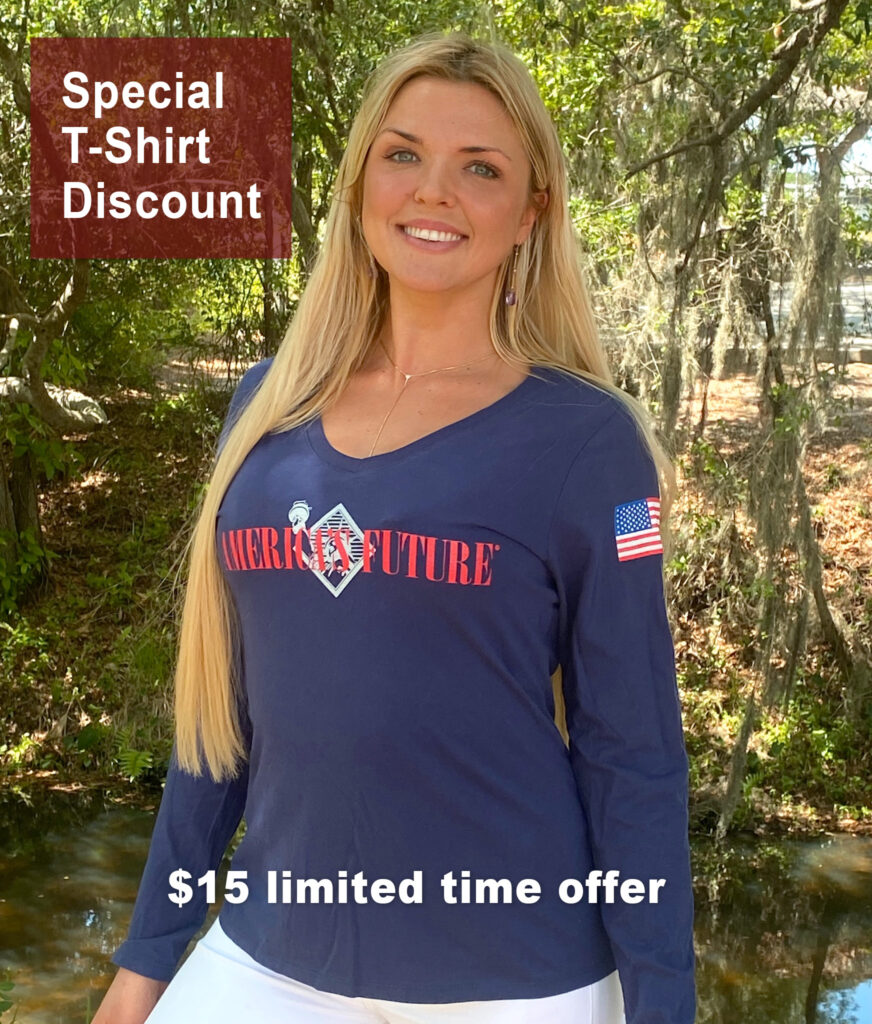 CHAMPIONS Fulfill The Promise of America

Our Champion For America community group network is established, the next edition of THE CHAMPION newsletter is in production and “A Champion Conversation with General Michael Flynn” webcast in May will be announced in the coming days! 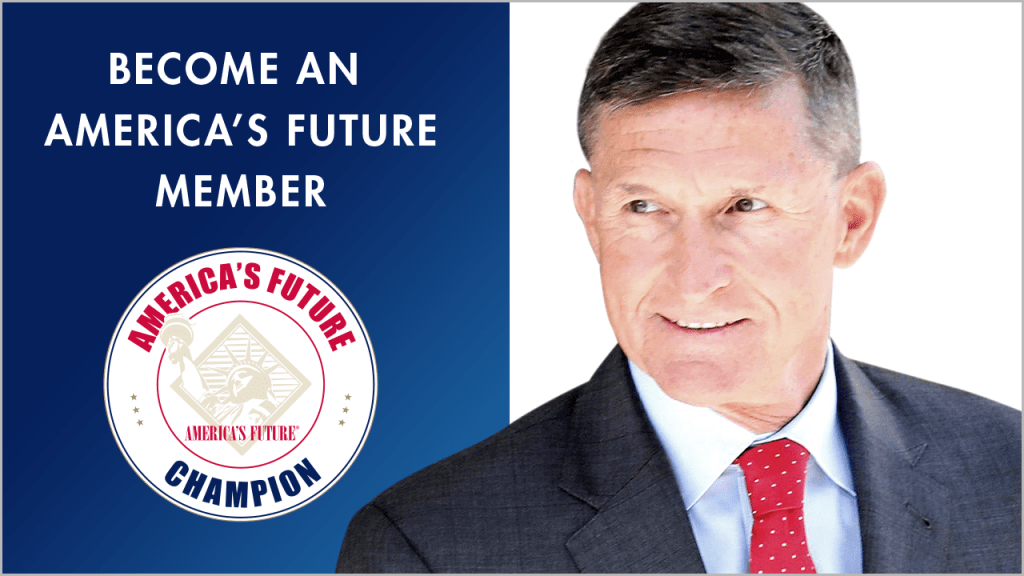 And, tune in every Monday morning on CloutHub Live between 9 and 10, for “America’s Mondays With Mary” when our Executive Director, Mary O’Neill shares nuggets of news about our Champion community and updates viewers about America’s Future programs and projects.