On Wednesday, December 7, 2022, America’s Future, along with two other nonprofit organizations, submitted an Amicus brief to the Supreme Court of the United States in Gonzalez v Google, Dkt. No. 21-1333 (2022), a case that may provide specific circumstances or conditions that, if present, will expose big tech internet providers, such as Google, to civil liability for injuries suffered by an aggrieved party that is caused by big tech’s manipulation of information optimization decisions.

Our brief offers the Court real-world context, a fresh perspective, along with insight and information bearing on the legal and factual issues arising out of this case, pursuant to Section 230(c)(1) and (c)(2) of the 1996 Communications Decency Act (CDA), a statute that provides certain protection from liability to internet companies who provide a user-interactive service.

This case comes to the SCOTUS based on the Ninth Circuit Court of Appeals’ decision to uphold the trial court’s dismissal reasoning, “‘recommendations and notifications [i.e., Google’s algorithmic decisions, are] meant to facilitate the communication and content of others,’ and ‘not content in and of themselves.’”

Briefly, the facts of this case are as follows – in 2015, a young American woman, Nohemi Gonzalez, was killed in an ISIS terror attack in Paris. Plaintiffs, in this case, include grieving family members and the estate of the victim decedent, Ms. Gonzalez.  Plaintiffs elected to sue Google (which owns YouTube) based on the theory Google is at fault for the death of Ms. Gonzalez because Google’s algorithmic controls of YouTube’s video search results recommended users view ISIS recruiting videos that communicated the terrorist group’s message, sought new recruits, and furthered the mission of ISIS.  Plaintiffs further allege these “targeted results” promoted ISIS and contributed to its growth and capabilities, which ultimately led to the untimely and devastating loss of their loved one. Plaintiffs further argue Google shared advertising revenue with ISIS for paid advertisements in connection with the ISIS recruiting videos.

From a more global perspective, this case centers around algorithmic censorship, suppression, and/or promotion of certain information and user content by social media platforms and “big tech” giants like YouTube, Twitter, Facebook, Google, Yahoo!, and Bing and whether Section 230 is broad or limited in scope.  Likely, the use and misuse of discretionary algorithmic coding by big tech companies to skew search results, potentially injuring users, will likely play a big role in the explanation of the eventual ruling in this case.

Significantly, as Elon Musk continues to shed light on big government, big tech, and big media joining together as if co-conspirators in one big lawless enterprise, legal scholars contemplate whether this case will shed light on how SCOTUS might handle future civil or criminal cases against the US government and/or corrupt government officials for criminal conduct, First Amendment violations or some case-mix of the two.  Section 230 should certainly not be strong enough to overcome Constitutional scrutiny if the use by big tech amounts to proxy censorship or “censorship by surrogate” in favor of the government.

To this point, our Amicus brief explains in plain terms,

If decisions are being made behind the scenes by government officials determining who may participate in social media and what positions they may take, then Section 230 serves the government’s interest to avoid discovery into such secretive and unconstitutional forms of control of the marketplace of ideas.

These days, we are learning, in real-time, the dangers of living in a cyber-based “big tech, big government” universe where abuse of authority combined with a simple keystroke can create false narratives forming depraved prosecutions and political persecutions.  This perfect storm violates our God-given liberties at every turn.

The brief recognizes this complex issue and offers insight into resolving this deeply concerning current-day societal problem. Our Amicus brief suggests to the Court, as follows,

This thorny problem of government control over the Internet could be substantially remedied if courts carefully construe Section 230 so that it only immunizes decisions made by providers that meet the statutory preconditions.

When these companies surrender their operations to government control, they are no longer acting voluntarily or in good faith as Section 230 requires, and thus are no longer entitled to the liability shield provided by that section.

We, at America’s Future, pray that for the sake of saving a civil, decent society and to further the survival of our nation, the SCOTUS heeds our insight and holds to account those who are willing to destroy America.

Editor’s Note: For more information on this case, read our previous article on this case: SCOTUS To Decide Blockbuster Social Media Censorship Case In October 2022 Term 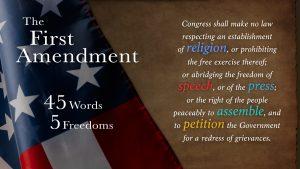